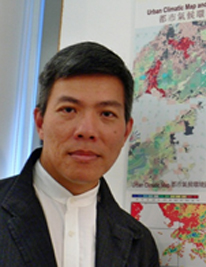 ‘Sustainable Living in Compact Urban and Built Environment in the Tropics’

Professor NG Yan Yung Edward is Professor of Architecture in the School of Architecture of The Chinese University of Hong Kong (CUHK). He is the first incumbent of the Yao Ling Sun Endowed Chair in Architecture. He obtained his doctoral degree from the University of Cambridge. He worked as an architect before becoming a professor. He specializes in Green Building, Environmental and Sustainable Design, and Urban Climatology for City Planning. At CUHK, Professor Ng is also the Director of the Master of Science of Sustainable and Environmental Design Programme, the Associate Director of the Institute of Future Cities (IOFC), and the Team Leader of Urban Sustainability and Public Health in the Institute of Energy, Environment and Sustainability (IEES). As an environmental consultant to the Government of the Hong Kong Special Administrative Region, Professor Ng developed the performance-based daylight design practice note, the Air Ventilation Assessment Technical Guidelines and the Urban Climatic Maps for City Planning. He is now working with the governments and agencies in Singapore and Macau, as well as a number of Chinese cities, on Urban Climatic Maps. Among many of his research interests, he is collaborating with public health colleagues to investigate the impact of city design and climate change on urban living.

In 2005, Professor Ng pioneered the idea of “Wu Zhi Qiao” (Bridge to China) and successfully built the first bridge in Gansu in China together with students from CUHK and other universities and professionals. Later, in 2007, he founded the “Wu Zhi Qiao (Bridge to China) Charitable Foundation” and held the founding chairmanship until 2013. In 2006, while still building bridges, Professor Ng initiated “A School To Learn” campaign and led his architecture students to build school facilities and start an education assistance programme in Guangxi in South West China. In early 2014, noting the cultural and socio-economical needs of remote villagers in South West China, Professor Ng established the “One University One Village Project Initiative” to continue his humanitarian work with his students. He believes that knowledge creates the future, and it is the responsibility of academia to chart this future.

Professor Ng has published over 400 papers and 3 books. He has twice received the International Award from the Royal Institute of British Architects (RIBA). He has also twice been honoured by the UNESCO Asia Pacific Heritage Jury Commendation for Innovation Award. He was the recipient of the 2010 Red Cross Humanitarian Award and was named as one of the “Asian of the Year” by Reader's Digest in 2011.